Musical box cases are fine European and marquetry furniture- they require every skill necessary in fine furniture conservation- including ormolu mounts, enamel and hardstone inlays. Parquetry and marquetry with exotic woods all French polished. I have restored furniture since 1989 and maintain a complete woodshop. I have extensive sources in Italy to replicate missing elements at the highest level.

I am in my Rome studio several months a year working with artisans and restorers- gilding, chasing, casting, glasswork, scagliola and micromosaics, studying conservation and working. The level of expertise and sophistication in Florence is indisputably the best in the world. I maintain workrooms in Rome on Via dei Coronari- the only existing ancient Roman street in the city near the Senate and Piazza Navona.

There are enough clock men or woodworkers in Italy, but no specialists musical box restorers in 60 million Italians. As a result, I am developing contacts and working there as well. We are luckier here in the US and Northern Europe. There are some older restorers in many regions who you already may be familiar with.

After 15 years of restoring English and American early gilding, I studied and worked in Florence where I learned closely guarded Italian techniques.  Applying gold leaf to a surface is trivial compared to the time, skill and art of patinating to the desired effect- up to a year.  After we are done, your mirror will still look 300 years old.  Usually, there is enough of the original underneath to be enhanced and blended after consolidating and cleaning the existing substrate of any later coatings. We are also skilled at the techniques of faux fire or mercury gilding used on English brass from the 18th  century onward.

We also cold gild porcelain to matching the lost burnished surface and create eglomise panels on glass. To learn more about gilding, a good place to start is The Society of Gilders. For more information on conservation, visit the American Institute for Conservation of Historic and Artistic Works.

The case, of thin inlaid rosewood and piano finish black polish, must also be restored to the highest standards with techniques only used in the finest antiques. A fully tooled horological machine shop and wood shop is available to replicate any part required. Music boxes are unique: to achieve strong value, everything must sparkle and sound factory new with every note playing crisply, an unrestored box will bring 1/10th the price at auction, so restoration fees are usually recoverable. All work is warranted using original techniques and materials and I am available by appointment at your convenience. 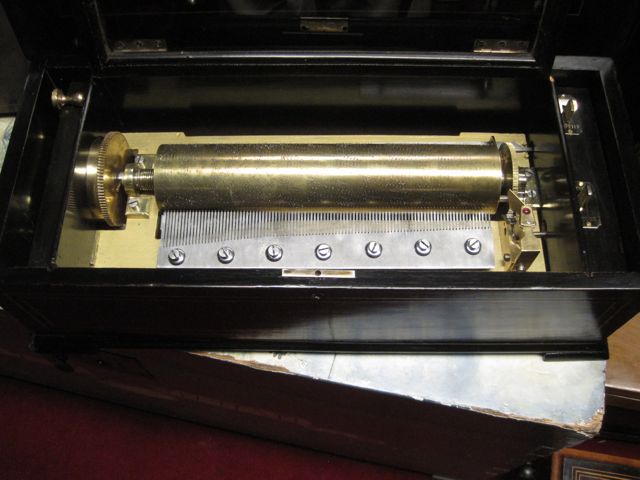 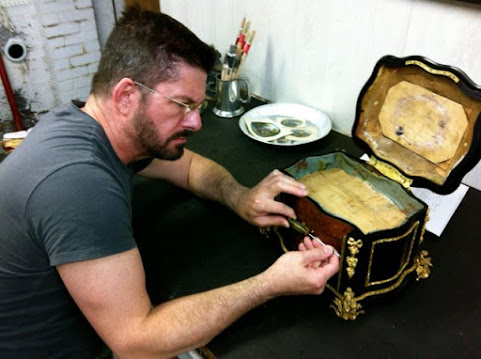 Educated and informed restoration can add considerable value to a music box, conversely, amateur attempts can cause complete destruction of the mechanism in a single moment. It takes years of apprenticeship and experience at the workbench of a teacher to perfectly restore the song of these fine musical instruments. It is a nearly lost craft tradition passed down directly from the Swiss.

A music box is often the last and most treasured keepsake in a family so entrusting it to just anyone can be a cause of anxiety. However, they can be reassured as our first appointment always takes more than an hour to discuss every detail. There are less than ten professional restorers in the USA, most are elderly and there are none in Italy. I work meticulously and my US clients may often wait over a year for me to even begin. Once begun, a full restoration can often take 40 to 60 hours. Many of my antique tools were custom made for this work by past specialists. Every new part must be handmade one by one, nothing is interchangeable. A partial job will never sound as good nor function optimally. Not one box I have restored has ever required further attention in 30 years.

The best conservation uses only historically correct materials and tools. I guarantee all my work and strive to build long term relationships with all my collector clients. The best conservation will add value to your fine object's worth, beauty and enjoyability while allowing it to be used and enjoyed more by others without fear of further damage.

"We strive to educate our clients in the philosophy of conservation- the preservation of all existing original materials whileintegrating modern elements flawlessly."

It truly is impossible to estimate a restoration project without seeing the project firsthand and even then the work involved may reveal complications after beginning however our fees will never exceed our initial estimate. We can provide written appraisal work for our local clients.